When Mark Young was 5 years old, he would hold the flashlight while his older brothers Bruce and Frank tinkered with some broken down car or motorcycle. 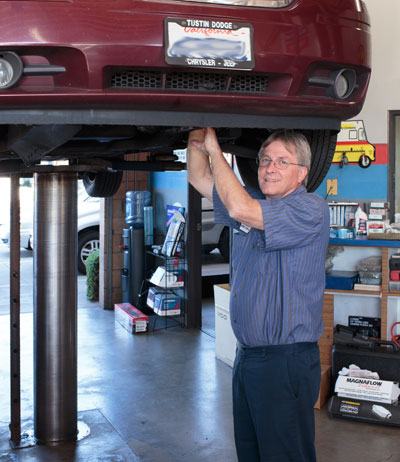 More than 30 years later, Mark Young does a lot more than hold a flashlight, but he and his brothers are still teaming up.

“We all know we can trust the other person’s work, which makes the job a lot easier,” Mark Young said, “We take pride in the good reputation we have built up, and that is a result of doing good work.”

Before the current Covina location, they owned and operated both a repair shop and a gas station in Sierra Madre for 10 years. When they outgrew that facility, they moved to Covina and their customers followed.

“We have a lot of loyal customers. It’s been gratifying to have so many customers not only stick with us but also recommend us as well.”

“When we began in 1980 we wanted to be able to do repairs our way – no matter how much times it takes. We never let a car go unless we are satisfied it is repaired right. Sometimes that means spending a little extra time, in some cases personal time, doing the little extra to achieve that goal.”

The Young brothers have had an interest in cars since they were children. They attended Don Bosco Technical School for auto mechanics. Each worked for a few years for Volkswagen before opening their own shop. And schooling continues to be ongoing in order to stay up-to-date with the changes for cars.

They enjoy what they do and still work on cars in their off hours. “We enjoy the challenge of finding out what’s wrong with a car and then fixing it. It’s rewarding.”